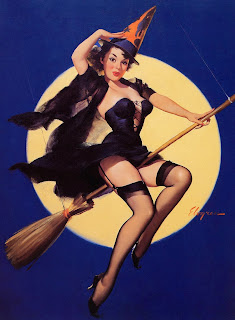 Perhaps one of the best known images associated with Halloween was painted by the legendary pin-up artist Gil Elvgren (1914-1980). His iconic witch on a broomstick was titled “Riding High” which was a title he had used before, and would in fact use again. Those other pin-ups titled “Riding High” bear no resemblance to this 1958 painting. “Riding High” was a 30 x 24 oil on canvas commissioned advertising piece. His model was Marilyn Hanold (also known as Marilyn Neilson) best known as the June 1959 Playboy Playmate of the Month. Marilyn is still alive last I heard and bless her heart. She had a brief career in films such as Space Ship Sappy (1957) a Three Stooges short, The Brain that Wouldn’t Die (1962), and Frankenstein Meets the Space Monster (1965) among others. This is one gal I would love to interview. Shown here are two of Elvgren’s photographic studies that eventually became the classic we know as “Riding High.” 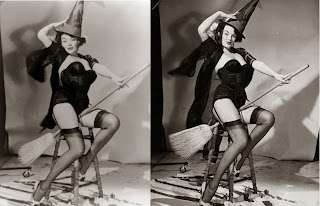 Posted by Thomas McNulty at 6:10 PM