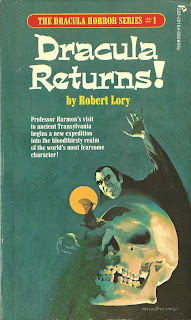 This 1973 paperback original published by Pinnacle Books is now widely considered the best of the Dracula novels that soon flooded the market. The brainchild of publisher Lyle Kenyon Engel, Dracula Returns was the first in the “Dracula Horror Series.” Written by Robert Lory, who would write eight additional books in the series, this moody pulp paperback fuses the gothic plot elements created by Bram Stoker with pulp science fiction. As was the case with most of Lyle Kenyon Engel’s paperback series, the initial sales were strong but declined dramatically by the ninth book. In the first tale Dracula is resurrected by Dr. Damien Harmon and his assistant Cameron. Author Lory never strays from the singular fact that film actor Bela Lugosi had come to embody the vampire image, and a such Lory’s description of Dracula are no more than vivid recreations of Lugosi’s countenance: black hair combed back, a Roman nose and black-tie formal attire. In order to control Dracula they implant a small device into Dracula’s body which can implant a sliver of a wooden stake in the vampire’s heart. With this device they can disable Dracula at any moment. This ingenious plot device provides the series a crucial level of suspense as it becomes obvious that Dracula is looking for a way to control his controllers. Dr. Harmon’s goal is to use Dracula in a war against crime. The arrangement provides Dracula with ample victims to satisfy his hunger while fulfilling Dr. Harmon’s ideological wishes. Lory’s Dracula never resembles the Bram Stoker original save in the story’s mood, and that’s just as well. Lory is a fine writer and the pacing is energetic, the scenes sufficiently creepy and the dialogue campy. Somehow it all works, and it worked equally as well in the subsequent eight books. Dracula Returns is a must-have paperback for those cold, dark nights leading up to Halloween.
Posted by Thomas McNulty at 6:27 PM