Waters of Darkness by David C. Smith and Joe Bonadonna 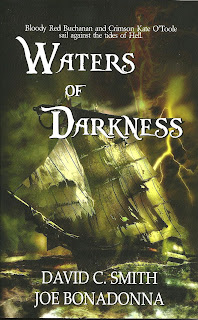 David C. Smith and Joe Bonadonna have written a rousing adventure tale with “Waters of Darkness.” Part swashbuckler and part fantasy with a generous dose of horror, this is the book that bridges the gap between Robert E. Howard and Rafael Sabatini. Believe it, m’hearties, “Waters of Darkness” is equally as good as anything Howard and Sabatini ever published. The action heats up immediately when Bloody Red Buchanan and Crimson Kate O’Toole set out to retrieve the lost treasure of an Arab named Achmed-ibn-Abdul from a place called the Isle of Shadow. After narrowly escaping the clutches of a weird creature with shark like fins down the length of its spine and frog/fish hybrid head, they are besieged by a castaway named basil who morphs into squid like monster with arms that grow into tentacles. Dispatched by Kate’s musket (this lass is skilled with a sword or musket and happy in bed with the likes of Bloody Red Buchanan) they escape the Isle of Shadow after losing quite a few men. To compound their confusion and fear, the treasure has changed into lead coins. Buchanan is uneasy and feels that they have literally sailed into strange waters. Naturally, he’s right. Some time later they encounter a drifting raft where the last surviving occupant warns them “The gong. Oh God, God. No–no. The beasts!” Buchanan sees this as a bad omen, and that it is. As captains of the Raven and the Witch, Buchanan’s partnership with Crimson Kate O’Toole has been successful and the adventures remarkable, but now they have sailed into dark waters, and their path is plagued by demons. “Waters of Darkness” is a grand adventure, brimming with action, fantastic characters, villains and monsters and heroes and damsels. The plot twists are delicious. I was floored when a certain character...oops...that would be telling! The action scenes are plentiful and written in the classic style of pulp fiction: “His steel was a silver rush, dipping, slicing, sliding in and out and then striking again.” (p.90) David C. Smith has previously published twenty-two novels, primarily sword-and-sorcery, horror, and suspense. Joe Bonadonna is the author of “Mad Shadows” and “Three Against the Stars.” This marks their first collaboration together and I am looking forward to more from these two talented wordsmiths. “Waters of Darkness” is a great swashbuckling entertainment!
Posted by Thomas McNulty at 4:59 PM