The Devil - With Wings by L. Ron Hubbard 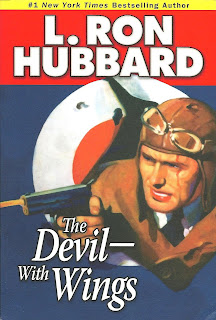 When I began reading and reviewing the Galaxy Press reprints of L. Ron Hubbard’s pulp fiction a few years ago, I knew I would enjoy most of the stories, if not all of them. What I didn’t know was the true depth of Hubbard’s talent as a genre writer. Now I do, and I am quite pleased to discover new favorites on a regular basis. The Devil - With Wings joins a growing list of stories that I list as among LRH’s best adventure tales. Stories such as Twenty Fathoms Down, Spy Killer, Devil’s Manhunt, Hell’s Legionnaire, Hostage To Death, The Tomb of Ten Thousand Dead, Red Death Over China, Under the Black Ensign and so many more are among the finest examples of pulp fiction you’ll find from the glorious Golden Age. Then, of course, there’s Battlefield Earth which celebrates its thirtieth anniversary soon. Hubbard’s air adventure stories are my favorites, and The Devil - With Wings falls neatly into that genre. A glittering jewel from 1937, Hubbard’s prose is perfect, the plotting impeccable, and the characters are American archetypes. The story involves a mysterious pilot known as The Devil - With Wings who is wanted by the Japanese. Feared by many, the black garbed stranger meets a vengeful woman who believes him to be responsible for her brother’s death. Hubbard’s prose is delicious throughout: “Dark strands of her brown hair curled out from under her flippant hat to lie smokily against the paleness of her brow. He could feel the intensity of her. She was like a swift storm or a blazing sunrise. Her mouth was full and sweet – and impetuous.” The tension in this story never lets up and the action is brutal and quite realistic. Hubbard is at his best when writing about topics that he understands, and as a barnstorming pilot himself you can feel the wind in your face as airplanes soar and dip in the sky: “The Kawasakis dropped like shot gulls out of a sky the color of flame...” This is great genre writing; vivid and alive with images. And when it comes to endings, well, let’s just say that Hubbard was a bit of a romantic, and that his romanticism, while not blatant, makes for the perfect concluding piece of dialogue. For those who prefer audio books, the Audio version is two CDs and stars Crispian Belfrage along with Bob Caso, R. F. Daley, Denice Duff and Jim Meskimen who also directed this outstanding performance. The Galaxy Press audio books have won numerous awards and are produced in the style of Golden Age radio dramas complete with sound effects and a quality musical score. The Devil - With Wings is now another in a long list of favorites. Thanks to Galaxy Press I am accumulating a hefty stack of great books. If you haven’t read one of Hubbard’s pulp tales I heartily recommend The Devil - With Wings.
Posted by Thomas McNulty at 6:55 PM