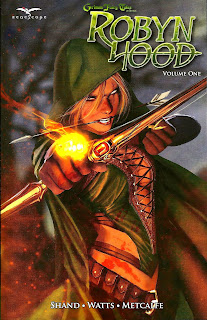 Zenescope Comics has been reinventing Grimm’s Fairy tales and producing a quirky but vibrant line of comics. This is the Trade Paperback of the first five issues of Robyn Hood, a re-telling of the classic legend. This time around Robyn is female and survived a beating by some locals who will most decidedly be the object of her revenge. With her mother dead, Robyn is transported to the land of Myst where she encounters the Merry Men in Sherwood Forest.  Apparently, Robyn is a “chosen one” – obviously a plot string that will play out as the series unfolds. After assisting the Merry Men she transports back to modern times where she exacts a nasty revenge on the man that had beaten her. The series is set up so that her actions in both worlds will have an effect on her further adventures. Without revealing too much, a plot twist with Little John in Sherwood Forest took me by surprise. The story is credited to Joe Brusha, Raven Gregory, Ralph Tedesco, and Pat Shand with each chapter written by Shand. The artwork is by Dan Glasl, Larry Watts, and Rob Dumo. The Trade Paperback reprints the sexy cover artwork including alternate covers. I’m not clear how these characters will fit in with the “universe” from the other Grimm’s Fairy Tales titles from Zenescope, and I’m not sure that it matters. Ultimately, this take on “Robyn Hood” is highly enjoyable. There is nothing here that requires deep analytics, but rather think of this as Saturday morning matinee with a buxom babe as the hero. Saucy and fun!
Click HERE to visit theZenescope website! 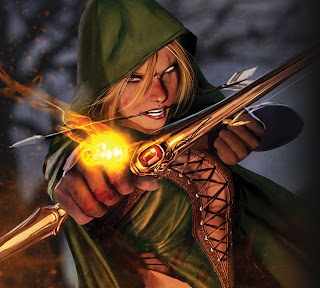 Posted by Thomas McNulty at 8:05 AM