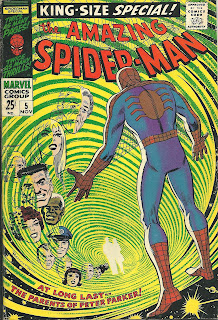 Here’s one from 1968 that I’ve always felt summed up what was grand about Stan Lee and Marvel Comics. With a script by Lee and artwork by his brother Larry Lieber with “Jazzy” John Romita credited as “Chaotic Consultant,” this is the untold story about Peter Parker’s parents. The artwork is great and Lee’s story is typical – suspenseful and meaningful without being preachy. Of course there was a moral undertone to everything that Lee wrote during this period. Forty pages of artwork and story with an appearance from a major Marvel villain, none other than the Red Skull. Believing his parents to be traitors, Parker soon learns the truth, but not before the Red Skull attempts to squash him. Naturally, the Red Skull is verbose and full of himself. Upon seeing Spider-Man for the first time he says: “Why, compared to my accursed enemy, Captain America, you’re no more than a spindly scarecrow! I’ll effortlessly destroy you – without the necessity of sullying my hands!” Spider-Man has other ideas, however, and the Red Skull soon learns that our friendly neighborhood web-slinger is light on his feet and equally as resourceful as Captain America. A classic tale from Marvel’s vaults, I don’t know if this issue has ever been reprinted, but it remains one of my all time favorites. Excelsior!
Posted by Thomas McNulty at 7:50 PM