Last of the Breed by Louis L’Amour 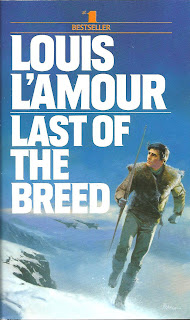 When Last of the Breed was published in hardcover in 1986 it was a huge success and justifiably praised as one of L’Amour’s best adventure novels. I agreed with that assessment and nothing in the intervening years has changed my mind. I re-read the book again recently and consider it among L’Amour’s finest popular entertainments. Although most of L’Amour’s books remain in print there has been a public tendency in the last decade to criticize or demean some of his work. Some of these criticisms are reasonable, but they also detract from L’Amour’s otherwise fine body of work. It’s true that he re-cycled plots and scenes in some of his Westerns, so much so that readers sometimes felt they were reading the same book but with different character names and a new cover. It is also true that his mammoth best-seller, Bendigo Shafter, suffers from poor plotting. These are valid and reasonable critiques but only account for a fraction of L’Amour’s canon. In broad terms, Louis L’Amour was among the greatest pulp writers turned popular novelist, and most of his Westerns are slam-bang chock full of fun. I have read (and still own) everything that L’Amour published during his lifetime. L’Amour would only live two more years after Last of the Breed was published; and in his final decade he was willing to take chances and write stories outside of the famed Western genre that he all but owned. Books like The Walking Drum and The Haunted Mesa found an eager audience. Last of the Breed was unique because it is essentially a modern Western with a unique twist. US Air Force Major Joe Mack, a native American, is shot down when flying an experimental military aircraft over Siberia. Captured by the Soviets, Mack escapes the prison camp and sets out across the Siberian wilderness, first with the intention of escaping, but ultimately with justice in mind. His adversaries are the Soviet tracker Alekhin and Colonel Zamatev. Part man-against the wilderness, part thriller, L’Amour layers the book with long passages about Mack’s tribulations while surviving the harsh Siberian winter, all while deftly closing the net, so to speak, as the Soviets move in on their quarry. Naturally, they’re in for a surprise. A sweeping, breathless epic, Louis L’Amour’s Last of the Breed is one of the all time greats. I rate it very high, along with other personal favorites Flint, Silver Canyon, Where the Long Grass Blows and many others.
Posted by Thomas McNulty at 3:46 PM