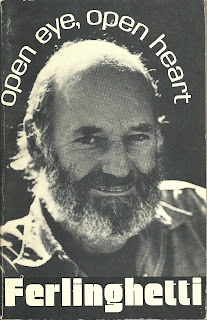 Celebrating National Poetry Month
For over fifty years Lawrence Ferlinghetti has produced a remarkable canon of poetry and prose. He is considered by many to be the last of the old literary lions. I can’t argue with that. He is certainly among the last of the Beat Generation (along with Gary Snyder), and the one that offered the highest quality. He was always far more interesting than the overrated Allen Ginsberg (a poet I once met and despised immediately). The first book I read by Ferlinghetti was A Coney Island of the Mind. That was about forty years ago. I still own my first copy, now dog-eared and yellowed from years of reading and re-reading. A Coney Island of the Mind has never lost its magic for me. Taking its title from Henry Miller’s Into the Night Life (a selection from Miller’s Black Spring, another favorite book), That unforgettable first line resonates still: “In Goya’s greatest scenes we seem to see...” and we’re off into a world rarely found in modern poetry. Ferlinghetti is political, passionate, imagistic, compassionate, angry, joyous and two dozen additional superlatives that don’t come close to doing this marvelous book justice. This was a book that I read straight through the first time and every few years, when I pick it up again, I read it from cover to cover without interruption. There are some writers where I can read sections incrementally and pick it up again a few days later, but not Ferlinghetti. I read all of his books in one sitting. The depth of his insight and the breadth of his talent demand my attention. I am glad for that. Another of his books that had an influence on me was Open Eye, Open Heart published in 1973. This book had prose sections without paragraphs; just blocks of text. That changed my way of thinking when it came to filling a page with words. Many poems and books followed and made there way into my den: Northwest Ecolog, Who Are We Now?, The Secret Meaning of Things, Landscapes of Living and Dying, How to Paint Sunlight and more. I have a framed and signed broadsheet of his poem Are There Not Still Fireflies hanging in my den not five feet from me as I type this inadequate tribute: “...Is not beauty still beauty/And truth still truth/Are there still not poets/Are there still not lovers/Are there still not mothers/sisters and brothers/Is there not still a full moon/once a month/Are there still not fireflies/Are there still not still stars at night/can we not still see them/in a bowl of night/signalling to us/our manifest destinies?” Ferlinghetti’s poems have been an important part of my intellectual and spiritual life, hand in hand, and I have benefited from this relationship. Among his recent work found in How to Paint Sunlight are rants and elegies and musings of all manner. Ferlinghetti is a true bard, a radical, and a great American Man of Letters. 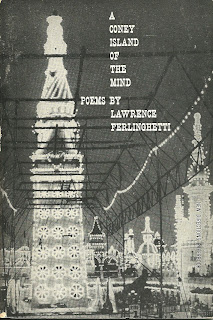 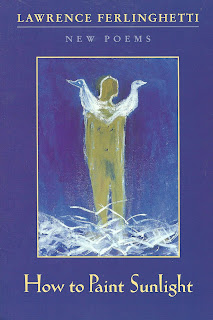 Posted by Thomas McNulty at 7:31 PM