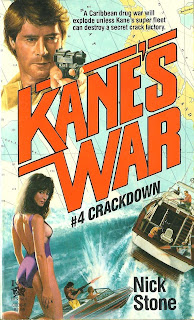 Kane’s War was a late 80s series that ran about six books, possibly more. I only read # 4 and # 6. I would have read more but I never saw the other titles. I’m assuming Nick Stone is a pseudonym. I have no other information about this series or its author, and when I googled it I found very little. What I can tell you is that I enjoyed the two books I read. Kane’s War # 4 Crackdown is a fast and enjoyable thriller. The setup: Ben Kane runs a charter boat service in the Caribbean that includes a fleet of Laser speedboats. Kane is a Vietnam vet seeking peace and solitude, but the Caribbean drug trade rubs him the wrong way. In # 4 Crackdown he sets his sights on the Cuban cocaine trade which has become a billion dollar operation, Recruited by a mysterious agent named Weaver, Kane plunges into an action packed adventure that is brutally violent. The action is all in the fashion of Ian Fleming’s James Bond novels and even the Nick Carter Killmaster series. As you would expect, there’s just enough raw sex with a beautiful woman to keep you turning the pages. The writing is logical and paced according to the genre. The sex is a welcome diversion from the suspense and action, as it should be. Kane’s War # 6 Dead Heat pits Kane against a group of killers who are trying to fix a sailing race. These two titles also reminded me of the Mack Bolan series. Kane has his own team of men at his side and the mysterious Weaver is somewhat like Hal Brognola from the Bolan books. Looking them over again recently I enjoyed them just as much the second time. 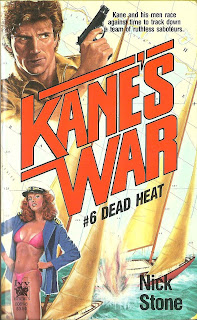 Posted by Thomas McNulty at 6:52 PM