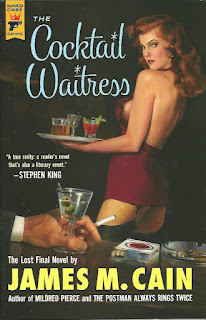 The Cocktail Waitress by James M. Cain was edited by Charles Ardai from Cain’s last manuscript. Its publication is something of a literary event. Cain was part of that hard-boiled group of the 30s and 40s who helped define pulp fiction. Cain has been described as one of the fundamental creators of “noir fiction” (“noir” means black in French) and the term noir fiction is a variant of “film noir” so named because French critics so defined post-war films as “film noir” because of their dark, gritty realism. Cain’s novels have also been described as roman noir or “dark novel.” What these convoluted facts really means is that James M. Cain wrote realistic dramas about people down on their luck His books are populated with grifters and con-men, hookers and corrupt businessmen. Cain’s famous novel, The Postman Always Rings Twice, was published in 1934. He published over twenty books before his death in 1977. In The Cocktail Waitress down-on-her-luck Joan Medford is broke and in need of a job after the death of her abusive alcoholic husband. The cops suspect Joan had something to do with her husband’s death but can’t prove it. She takes a job as a cocktail waitress at a place called The Garden of Roses. She attracts immediate attention with her revealing outfits and sexy figure. She is soon involved with two men – a millionaire named Earl K. White and a handsome man named Tom Barclay. Told in the first person from Joan’s point of view, the novel explores the very real world of despair and of dreams for something better. Joan knows that Mr. White can offer her the financial security she craves but she finds him sexually repulsive. Tom Barclay, himself a bit of a dreamer, offers her both romance and sexual fulfillment. In the midst of this she wants her toddler son back who is staying with relatives. Cain handles his twisting plot skillfully although at times it almost gets away from him. Beneath this layer of despair is the not too subtle hint that Joan did have something to do with her abusive husband’s death. Naturally, other characters perish and Joan becomes a suspect. The Cocktail Waitress is typical Cain all the way, with an ending that left me quite stunned. He sets it up and then deftly slips it onto the last page. Will Joan survive her turmoil’s? Is she guilty or innocent, and does it matter? At what price is happiness sold? This is James M. Cain territory and Charles Ardai and Hard Case Crime have given us all a gift with this final novel from a great American author. 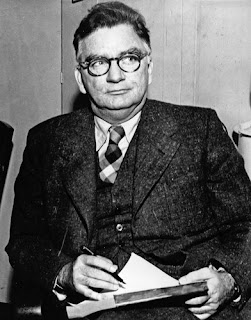 Posted by Thomas McNulty at 11:23 AM No comments:

Werewolves! - Just in time for Halloween! 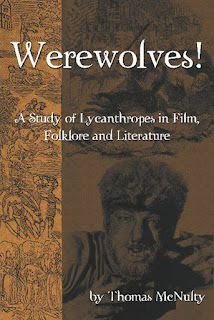 Something stirs in the darkness and pads along the moonlit path...


Werewolf stories have long captivated film audiences and lovers of pulp fiction. Thomas McNulty's Werewolves! explores the genesis for this cultural phenomenon dating back centuries when stories of shape shifters and wolf-men were predominant in folk tales. The book traces the origins of lycanthropy in mythology through modern times. Included are discussions of wolf mythology and the importance of the wolf symbol around the globe. Included is an examination of key werewolf stories and novels with an emphasis on popular fiction and pulp fiction. This is followed by a survey of the Hollywood films with chapters devoted to the Wolf-Man films starring Lon Chaney Jr. and the groundbreaking Spanish werewolf films of Paul Naschy. The survey of films includes titles from Hollywood's Golden Age to present times with commentary on over 70 werewolf films. The work includes a bibliography, filmography and index. Illustrated with rare photographs.
Posted by Thomas McNulty at 9:08 PM No comments: 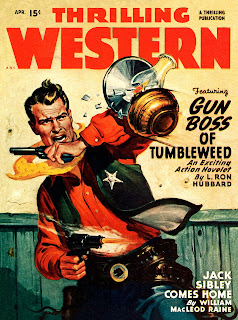 Clicke on this sentence to read the Antique Trader Pulp Westerns Article
My latest article in Antique Trader magazine is an overview of L. Ron Hubbard's pulp westerns. Followers of this blog will already have been treated to my ongoing reviews of the reprints from Galaxy Press (with more to come!) 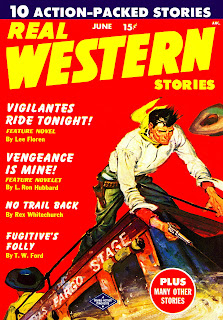 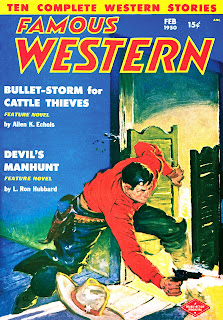 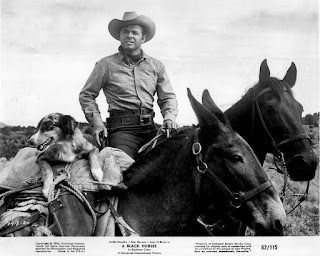 This is one of Burt Kennedy’s screenplays and I think one of his best. This underrated film opened in 1962 and would have slipped into obscurity if not for Audie Murphy. Because of his presence the film crops up every few years in retrospectives on the western genre. Over time it has become a fan favorite. Recently it even played on the Western Chanel. I would love to see a restored print on DVD like they did with Burt Kennedy’s other classic screenplay, Seven Men from Now (starring Randolph Scott). 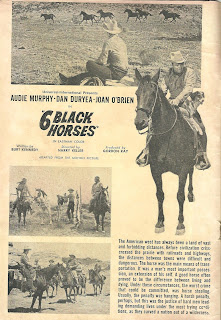 Six Black Horses is one of my top ten favorite westerns. It is not as action-packed as Audie Murphy’s other westerns, but the literate script, great acting and location scenery in St. George, Utah make this a special film. Saved from being hanged as a horse thief by Frank Jesse, (Dan Duryea), Ben Lane (Audie Murphy) and Frank meet up with Kelly (Joan O'Brien) who pays them to take her to a little town to be with her husband. Unknown to them, Kelly is setting Frank up and wants to kill him because he killed her husband in a shootout. Encounters with Indians makes Frank decide he doesn’t want to go further. Eventually, it comes to a showdown between Ben and Frank. 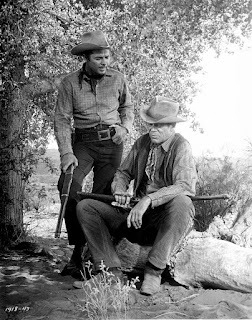 Running a scant 80 minutes under Harry Keller’s direction, Dan Duryea and Murphy are great together. Duryea had previously worked with Audie Murphy in Ride Clear of Diablo and Night Passage, two equally fine westerns. The sometimes poetic script by Kennedy adds another level to what might have been an average oater. When I interviewed Burt Kennedy years ago he made it clear that Audie Murphy was his hero. 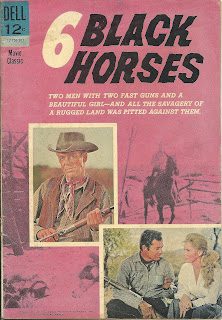 Six Black Horses is available on Region 2 DVD but not region 1. If any of you executives at Universal Studios happen to read this……well, I reckon it’s about time you did Audie Murphy’s westerns right. 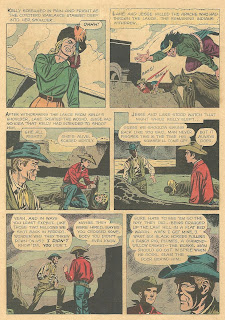 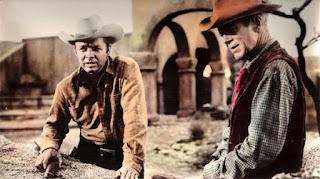 Posted by Thomas McNulty at 1:58 PM No comments: