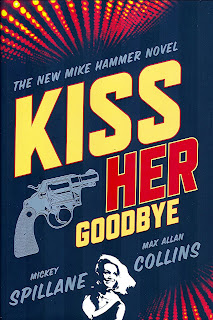 File this book under the categories: hardboiled, detective fiction and Do-Not-Miss. It fell to his close friend, Max Allan Collins, to organize and complete several unfinished manuscripts after Mickey Spillane’s death in 2006. The pairing was providential. Collins, who is underrated by critics and under-appreciated by publishers, is the only one that could handle a Spillane manuscript. His own Nathan Heller novels are neglected classics of hardboiled fiction. Kiss Her Goodbye is the third Mike Hammer collaboration and fourth effort by Collins working from one of Spillane’s stories. And it’s a knockout. 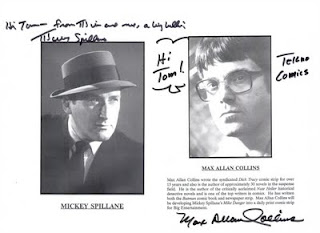 Time-wise this book takes place after Spillane’s Survival…Zero! (1970) and The Killing Man (1989). Mike Hammer returns to after learning of a friend’s death. Troubled by his aging and recently wounded body, Hammer sets out on the trail of a killer, ruminating at the changes time had brought to his beloved , as well as to his own life. According to Collins the theme of an older and ailing Mike Hammer returning to was important to Spillane. In fact, I’m confident scholars will one day wake up and trace the cultural and societal themes that are evident in all of Spillane’s work. This was a man that paid attention to the world around him, and as a writer he consistently explored new themes set against the backdrop of an adventure story. Sometimes it’s subtle, but it’s there. Collins knows the character. There’s even a sly reference to Velda’s original hair color (See “Tonight My Love” in Byline: Mickey Spillane, Crippen and Landru Books, 2004). 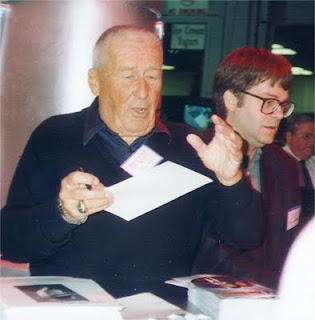 Kiss Her Goodbye is a thrill a minute ride; violent, sexy, and unforgettable. The lion’s share of the credit belongs to Max Allan Collins who has worked so diligently in fostering an appreciation for Spillane’s work. Kiss Her Goodbye should make converts of you all. When all is said and done, and the last Spillane manuscript has been prepared for publication, I would love to see Collins get the nod to produce a new series of novels starring Spillane’s Mike Hammer. And wouldn’t it be grand if he even teamed Hammer up with Nathan Heller.

Keep writing, Max. Somewhere in the hereafter the man in the porkpie hat is mighty proud of you. 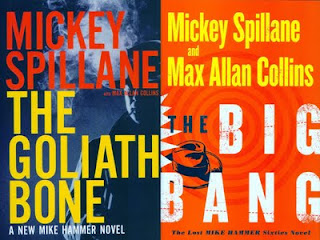 Posted by Thomas McNulty at 7:23 PM No comments: 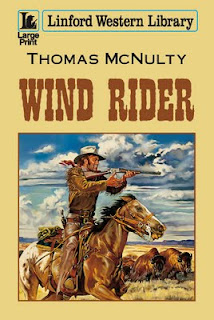 To order a copy of this book please contact:

Ulverscroft Large Print (USA) Inc.,
950A Union road, Suite 427
P.O. Box 1230,
West Seneca,
NY 14224-1230
Telephone: 716 674 4270
Toll Free: 1 800 955 9659
Fax: 716 674 4195
Email sales@ulverscroftusa.com
His name is Hank Benteen, but the Sioux call him Wind Rider. When Benteen rides into a Wyoming valley he saves a homesteader's life and that of his two children, but there's a range war brewing and some of the cowboys are hiding a murderous secret. Suddenly Benteen finds himself involved in a deadly conflict as he resolves to help the homesteaders against impossible odds. It isn't long before Benteen finds himself the target of two greedy men intent on killing him. Their dream of acquiring land by forcing out the homesteaders has turned into a deadly game and Benteen will need all of his skills as a gunman in order to survive.
Posted by Thomas McNulty at 5:33 PM No comments: 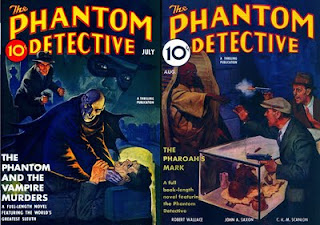 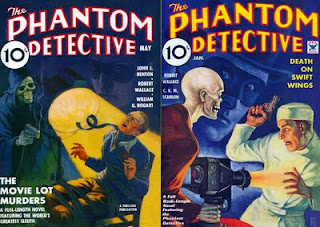 The Phantom (as he was called in the stories) was actually the wealthy Richard Curtis Van Loan. In the first few issues of the title, The Phantom was introduced as a world-famous detective, whose true identity was only known by one man. That man was Frank Havens, the publisher of the Clarion newspaper. The Phantom Detective is not to be confused with Lee Falk’s comic strip creation The Phantom. The Phantom Detective, The Spider, The Shadow and Doc Savage are by far the most popular pulp action heroes from the glorious golden age. The recent Altus Press trade paperback (shown below) reprints four outstanding Phantom stories by Laurence Donovan: The Thousand Island Murders, Death over Puget Sound, Murder Moon over Miami and Streamlined Murder. 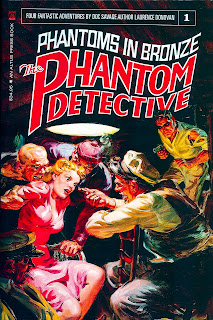 Posted by Thomas McNulty at 3:13 PM No comments: 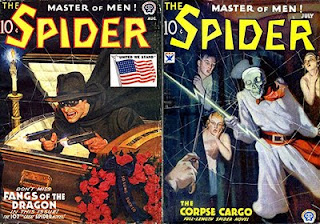 Created as a direct competitor to the ever-popular The Shadow, the Spider stories were published under the pseudonym Grant Stockridge. Although most of The Spider novels would then be written by Norvell Page, other authors working on the series included Emile C. Tepperman, Wayne Rogers, Prentice Winchell, and Donald C. Cormack. The Norvell Page stories are my favorites and are amongst the best adventure stories published during the golden age of pulp fiction. The Spider was in actuality millionaire playboy Richard Wentworth living in New York and unaffected by the Great Depression. Wentworth fought crime by donning a black cape, slouch hat, and face mask to terrorize the criminal underworld with extreme prejudice and his own brand of vigilante justice. 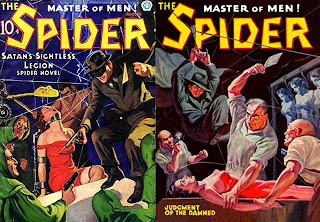 Multiple reprints are available, notably from Baen Books and Altus. Google The Spider on Amazon and you’ll find plenty to choose from. 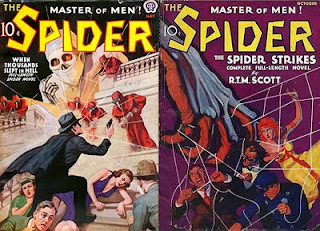 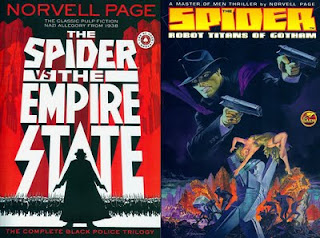 Posted by Thomas McNulty at 1:21 PM No comments: 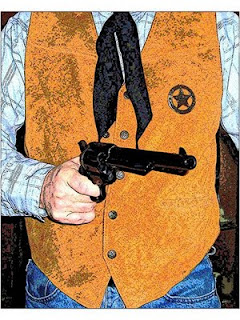 The western story, which originated in the nickel and dime pulp magazines of the late 1800s and flourished for a remarkable period from 1925 through the early 1960s. The western came of age as a pulp magazine and then as a paperback. The paperback market began to dry up in the 1970s as the celluloid western was replaced by the profitable science fiction extravaganzas. With the exception of books by Louis L’Amour, the western story was deemed a thing of the past. Well, not exactly. Although many knowledgeable people will tell you the western was effectively dead by 1980, I’m here to tell you the western never died. It’s been mishandled by the publishing industry, misunderstood by the public, and often ignored by certain factions of the writing community who view such stories as inferior. But it’s not dead.

Chief among the western’s allure was the pulp magazine’s cover. The colors were always vibrant and the landscape could be as breathtaking as a photograph or as simple as a comic book illustration. But the American west was (and remains) exotic. The vastness of the land itself and the perils of the wilderness called out to the armchair explorers and daydreaming heroes who were swept away by the galloping black stallions and swarthy gunmen who populated this landscape with blazing six-shooters and that determined ferocity painted into their eyes. This image, coupled with that of actors like William Boyd, Roy Rogers and Gene Autry, was enough to drive the imagination of several generations who yearned to become like the heroes they saw on the silver screen or read about in magazines. 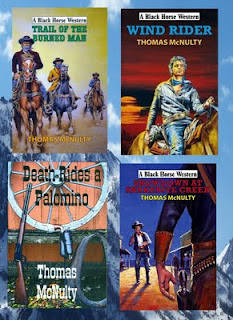 Then there are the stories themselves. Dismissed as mere “entertainments” by critics, the pulps told simple stories in masculine prose. Consider this bit from Gunman Brand by Thomas Thompson and published in the October 1951 issue of Zane Grey’s Western Magazine:

“The old habit that he had tried to break dropped his hand to the gun on his hip and then he drew his hand away, opening and closing it, hating that involuntary movement. The fastest draw in . He had been proud of that once. Hellishly proud. And it was hell how a dead man’s eyes could show you what an empty thing was that kind of pride.”

The prose gets right to the heart of the matter. It was the action that readers desired, both on the screen and on the page. The reliance on action to move the story forward is often cited as the principal reason for the western’s decline. I disagree. These writers and filmmakers were providing the audience what they craved. There was never any intimation that they were doing anything other than creating a simple entertainment. Yet it’s that very simplicity that is both reviled by critics and hungered for by audiences. Yes, it’s true that often a depth of characterization was sacrificed in favor of an extended shoot-out. Plots were always variations on good versus evil, pursuit and reconciliation. The stories sometimes trudged along as faithfully as the horses chewing their oats. Indeed, “Oaters” became a derogatory term used to describe westerns.

And the fun we had reading these stories played itself out on those summer days of yesteryear when we “played cowboy” on our lawns or in the parks, banging away at each other with our cap guns, drawling dialogue we’d heard at the movies, and reliving the best action-packed moments from the pulps with breathless glee. It was a time when a kid might dutifully place his cowboy hat on his head, strap on his plastic holster and cap gun, and announce, “Mom, I’m going next door to play cowboy with my friends.” And the great showdowns would begin. Gunfights in were reenacted on suburban streets or urban back-alleys, the BAM! BAM! of a cap gun as common on summer days as the sound of a lawn mower. We killed each other mercilessly, guns popping, buckets of imaginary blood stained our lawns. Yet remarkably, none of us grew up to be criminals.

Such playtime activities are frowned upon with disapproval today by the regiments of cell-phone wielding soccer moms and self-righteous purveyors of political correctness who strive so fervently to take away all of our fun.

Horses, guns and Stetsons. Bank robberies, train robberies, stagecoach hold-ups, cattle drives, homesteaders versus cattleman, Texas Rangers, and wagon trains under attack by Indians. The elements and images are as varied as the western vista itself, alive with the American experience. These are tales of love and madness, exploration and courage, wars and cattle drives. The western is ’s own genre, a genre that has come to define the country and its people. The publishers will tell you the market is small. The bookstore managers will tell you the market is small. But the reading public is another matter. I maintain the market – you readers – are alive and well.

Sure, it’s an uphill battle. The books rarely get reviewed, and the cynicism on the Internet (not to mention the apathy and egotism) makes promoting any book a process fraught with peril. But I endure, and I keep at it. And I am doubly-blessed when someone reads it and likes it.
Posted by Thomas McNulty at 9:03 PM No comments: