Review: Starting Over by Ken Sharp 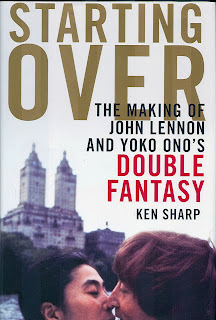 Learning that I rarely read celebrity biographies will come as a surprise to some. Having traveled that turbulent road myself, and being cognizant of the perils a chronology offers its historians, while at the same time finding myself horrified by the banality of most celebrity biographies, I have distanced myself from that quagmire of hacks, know-it-alls and snide commentators. I made an exception for Ken Sharp’s Starting Over: The Making of John Lennon and Yoko Ono’s ‘Double Fantasy’ which turned out to be every bit as good as I had hoped. This book is constructed as an oral biography that documents the events from August through December 8th, 1980. The book is illustrated with previously unpublished photographs by David M. Spindel and Roger Farrington of John and Yoko during their historic recording session. These photographs are priceless.
The book’s many first hand accounts and reminisces by the musicians, production team, friends and employees at the Hit Factory where the album was recorded offer remarkable insight into John and Yoko’s life. What stands out is the depth of Lennon’s creative genius, his passion for the creative art of songwriting, his intelligence, and the love he had for Yoko. This is, quite frankly, a heartbreaking love story.
Lennon’s assassination at the hands of a deranged fan is a grim reminder at how far our society has slunk into the darkness. A recent issue of Rolling Stone magazine offered his “lost interview” where Lennon states emphatically his dislike for “dead messiahs” which is sadly what he has become for far too many people. Ken Sharp’s Starting Over offers us a true-life glimpse of a working class lad with an extraordinary musical talent. Here is the real John Lennon, a hard-working rock and roller, devoted father and loving husband at the moment he re-visited his creative soul.
I remember listening to Double Fantasy not long before Lennon was murdered. I liked it and Yoko’s edgy songs, including her now famous “Yokorgasm” on the track “Kiss, Kiss, Kiss” elicited  collegiate debates in the university town between cornfields where I lived. It wasn’t too long afterward when late one evening I heard “Imagine” playing from someone’s dormitory room and we learned that Lennon had been killed. After that Double Fantasy became a bittersweet reminder of Lennon’s lost talent, and songs like “Beautiful Boy” and Yoko’s “Hard Times Are Over” sounded like laments. After reading Ken Sharp’s Starting Over I listened to the album again and it sounded just as fresh as the first time I heard it; it’s a solid musical experience with a dash of avant garde performance that made it unique. I have no doubt that if Lennon had lived and toured with Yoko they would have changed the minds of those critics who were initially harsh in their first reviews. Ken Sharp’s Starting Over is the only celebrity biography I have read this past year and I highly recommend it.
Posted by Thomas McNulty at 7:09 PM No comments:

Email ThisBlogThis!Share to TwitterShare to FacebookShare to Pinterest
Labels: John Lennon, Ken Sharp, Starting Over the making of Double Fantasy 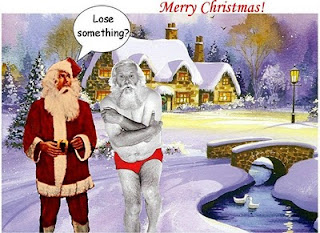 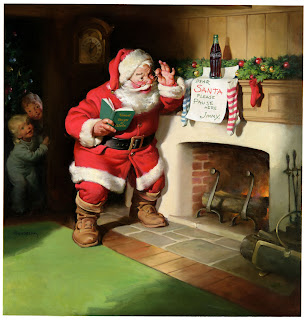 Merry Christmas and Happy Holidays! I'll be back early in January with news, reviews, essays and more! Until then stay safe and happy! 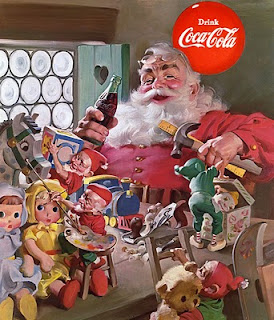 Posted by Thomas McNulty at 1:17 PM No comments: 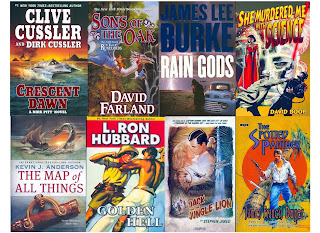 Since the early 1970s I have maintained the habit of reading one book per week, but this year I managed to read 72 books which included some novellas. Here are some – but not all – of my favorite fiction titles from 2010.
The Map of All Things by Kevin J. Anderson
She Murdered Me with Science by David Boop
Rain Gods by James Lee Burke
Crescent Dawn by Clive and Dirk Cussler.
The Spotted Panther by James Francis Dwyer
Sons of the Oak by David Farland
Captain Hazzard: Cavemen of New York by Ron Fortier
Ghost Squad: Rise of the Black Legion by Ron Fortier and Andrew Salmon
Golden Hell by L. Ron Hubbard
Jack and the Jungle Lion by Stephen Jared
The Pirate Devlin by Mark Keating
Tanner’s Guns by Matt Logan
The City of Corpses by Norvell Page
Sentinels: When Strikes the Warlord by Van Allen Plexico
Shell Scott’s Seven Slaughters by Richard S. Prather
The Big Bang by Mickey Spillane and Max Allan Collins
Robin Hood: King of Sherwood by I. A. Watson
You’ll note a preponderance of pulp fiction listed given that I am a fan of that special era. As time permits I’ll post additional reviews. Enjoy! 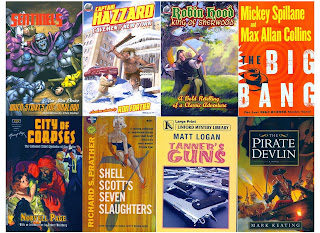 Posted by Thomas McNulty at 8:59 PM No comments: 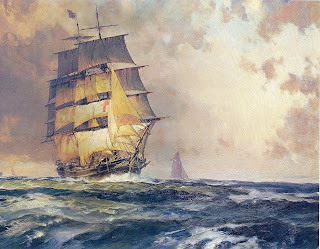 Sea-Fever
John Masefield
I must down to the seas again, to the lonely sea and sky,
And all I ask is a tall ship and a star to steer her by,
And the wheel’s kick and the wind’s song and the white sail’s shaking
And a gray mist on the sea’s face and a gray dawn breaking.
I must down to the seas again, for the call of the running tide
Is a wild call and a clear call that may not be denied;
And all I ask is a windy day with the white clouds flying,
And the flung spray and the blown spume, and the sea-gulls crying.
I must down to the seas again to the vagrant gypsy life,
To the gull’s way and the whale’s way where the wind’s like a whetted knife;
And all I ask is a merry yarn from a laughing fellow-rover,
And quiet sleep and a sweet dream when the long trick’s over.
***
NOTE: John Masefield was born in 1878 in Ledbury, Herefordshire and died in 1967. “The Sea-Fever” is one of his better known poems although modern readers might bemoan the missing verb “go” from the phrase “I must down to the seas again…” as Masfield wrote a series of poems about sailors in their natural colloquial style. The poem is presented here as an intellectual interlude and stimulant for the wary traveler of cyberspace where so much nonsense is spread across the digital highway like silicon graffiti. Take a breath, man, read.
The photograph is a painting by John Stobart.
Posted by Thomas McNulty at 10:07 AM No comments:

Trail of the Burned Man rides into large print! 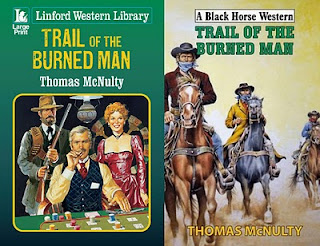 Trail of the Burned Man is officially available today in large print. Written in the style of the pulp adventure stories of the 30s and 40s, this was my first western. Hardback copies are also still available. You can order your copy HERE.
Posted by Thomas McNulty at 5:42 PM No comments: